eric jones - The Ups and Downs of a Tremadog Tea Maker 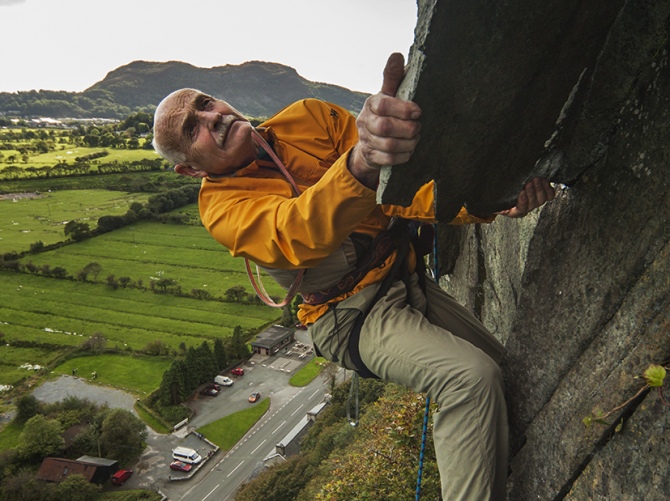 Eric Jones was born in 1935 and took up skydiving and climbing in his 20s. By the time he was in his 50s, he’d progressed to BASE jumping off the Eiger. “The Ups and Downs of a Tremadog Tea Maker” is a rare public talk from the trailblazing mountaineer, who will cover his early climbing days in Wales and the Dolomites. He’ll talk about his alpine soloing on the Eiger, Matterhorn, and Mont Blanc, BASE jumping from Angel Falls in Venezuela, as well as climbing the Old Man of Hoy and Devils Tower in his 70s. Eric’s exploits were years ahead of their time and he is regarded by many as Britain’s most successful solo climber. 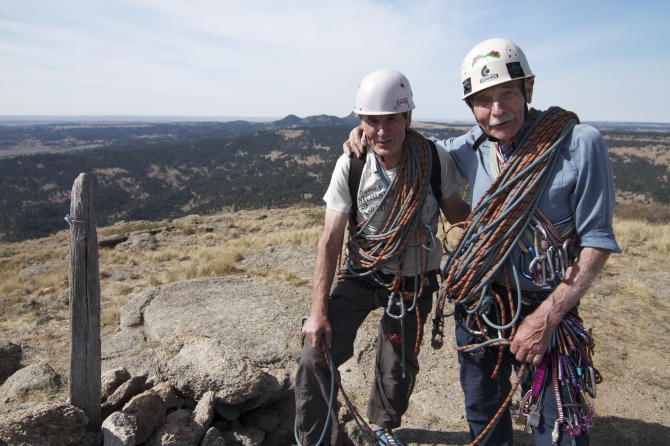 Though it’s a climbing film, 75 Never too Old is really a documentary about two friends growing old together examining their wise old philosophies on life. The setting is dramatic, the uniqueness of the Devils Tower and the breathtaking climbing photography creates it’s own drama – but, essentially it’s a story about two old men “fighting against the dying of the light”! Eric and Jeremy are both articulate characters and have a fantastic bond and a deep friendship and understanding. They are very different characters. Eric is more impulsive and Jeremy is more reserved and quiet. Eric is a famous adventurer whereas Jeremy is a farmer and a family man with four kids and ten grandchildren. For most of his life Jeremy was tied to his land and family business and had little free time to pursue his dreams of adventure and danger. In his 40’s – inspired by his new friend Eric Jones – he started an annual pilgrimage to the Alps and only in semi retirement and past his 70th year did he find time to seek new adventures. Eric and Jeremy are two old guys who’ve always had this passion for adventure and love for speed. This film manages to illustrate the dangers of climbing and it is exciting and breath-taking. Their story is a celebration of life. Eric has an artificial knee and frostbitten toes so The Devils Tower was the worst sort of painful climbing for him but the message is ‘Whatever age you are, keep going on to your next adventure and your next dream’. Eric and Jeremy’s story is a big story from a small place with global appeal. 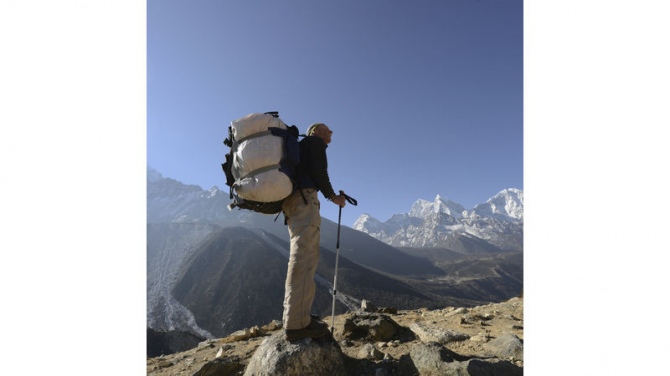 Ever wondered what it must be like to work as a porter in the Himalayas? Well Kendal-based photographer and mountain guide Rob Fraser did so he set out to find out for himself.

Rob walked for up to 8 hours each day in hot and dusty conditions. By the second day his calves were sore, his shoulders hurt and both feet were in a bit of a mess. And he had a horrible sore spot develop on the base of my spine. "I seriously questioned my sanity as to what I was doing there."

There were two motives behind the project. Firstly, Rob wanted to shine a light on the hard work that the porters do to support the dreams of trekkers to get high into the Himalayas and, secondly, he wanted to see if he as a relatively fit 51-year-old bloke could cope with the rigours of the work. He somehow made it and came back with a greater respect for the people who are the backbone of the mountain economy.

The idea came to Rob a dream whilst he was leading a trek in Limi, a time-static valley nudged up into the far west of Nepal. Be careful what you dream of...