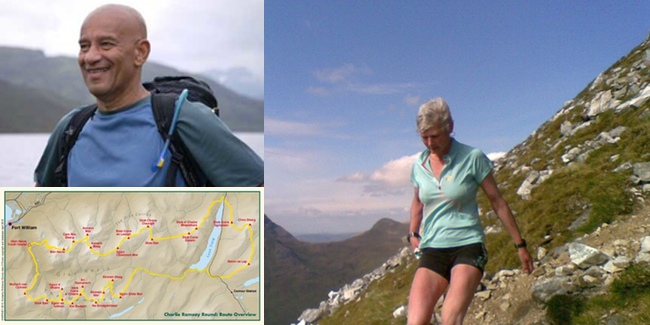 In 1978 Charlie Ramsay climbed a total of 24 Munros (mountains over 3,000 feet) of which Ben Nevis was the last. With just 2 minutes to spare he had achieved his dream of circuiting all the Lochaber mountains in a single day.

Charlie had set a record, which was to last for nine years, and had created Scotland’s Classic Mountain Marathon, a distance of 56 miles and 28,500 feet of climbing.

The Charlie Ramsay Round is one of the UK's big three sub-24-hour fell running challenges alongside the the Bob Graham and Paddy Buckley rounds. Tthe route covers 24 Lochaber Munros in a 60-mile circuit around Ben Nevis, the Aonachs, the Grey Corries, the Easains, the Loch Treig Munros and the whole Mamores ridge.

About Nicky Spinks: In May Nicky broke the female record for the Ramsay Round, taking 45 minutes from the previous women's best time and logging the second fastest ever time on the route into the bargain. With her incredible time of 19 hours 39 minutes Nicky is now the only person to have completed all three rounds in under 20 hours apiece.

BUY TICKETS ONLINE from BUXTON OPERA HOUSE OR PHONE 0845 127 2190 OR BUY IN PERSON FROM the OPERA HOUSE BOX OFFICE.

Or buy via Eventbrite where you can book multi-savers and family saver tickets.  For bigger group discount enquiries, email lissa@heason.net.  If we sell out on Eventbrite, try the Opera House or buy on the day.

Harvey Maps are kindly offering a 25% discount off any map until December 31st 2014 for anyone attending Charlie Ramsay's talk.